Nestled on the edge of Civic Square overlooking the Launceston Town Hall, the distinct orange canvas of the ABC Open tent provided us with another festival gem; the Open Air Cinema. A chilly evening breeze wasn’t enough to deter me from taking a seat (mind you at the chime of half-six I wished I had allowed enough time to grab a warm Wild Willow coffee). It was freezing, but it didn’t matter because the collection of short ABC Open film projects had my attention and I was determined to tough it out.
Read more »
Posted by Patrick Sutczak at 4:25 PM No comments:

Libraries are amongst the most magical of places. Indeed, they have changed somewhat to incorporate the shifts in the way we access information, and the way we share it, evolving into information hubs and network centres; but they still have books; books that despite content, have dimension and weight. Evident in the minuscule mangling of pages and bindings lay the history of hundreds, if not thousands, of inquisitive, interested borrowers who unconsciously caressed each leaf corner with certain sensuality, until the words ran out and the page got flicked. Jilted maybe, returned most likely; the books I speak of are compressed into rank and file, but if we find what we want – we can reach out and touch it.
Read more »
Posted by Patrick Sutczak at 5:00 PM No comments:

Sometimes when you are sitting in the dark waiting for something extraordinary to happen, it does. To try to explain There would be almost impossible. I am still trying to piece it together, but the more I try to gather the threads the more they are pulled from my hands leaving me with a lovely afterglow. And, believe me, that’s a great thing.

Read more »
Posted by Kylie Eastley at 2:35 PM No comments:

The Lazlo Steigenberger Project: You just won't believe how vastly, hugely, mindbogglingly big it is

There's been a massive mistake and the Government has hired Lazlo Steigenberger to help.

The earth is in peril from an insidious misconception that threatens our very species, but don't panic! Lazlo with his planet motion simulator and ten-minute full-bodied sixteen-stage workshop has all the facts, messages and reassurances - and all you need to bring with you is your imagination.

Is he a consultant? Government plant? Motivational speaker? Or the man most likely to save the world since Arthur Dent…

I admit that in preparing to write this, I am faced with a personal dilemma. On one hand I want to relate my Lazlo Steigenberger experience, and on the other hand I want to let you experience it for yourself. So, here is what I am going to do…
Read more »
Posted by Patrick Sutczak at 6:56 PM No comments:

So you think you can judge

THE event of the Junction Arts Festival 2011 program, So You Think You Can Interpretive Dance, was lucky enough to secure me as their celebrity judge to give some credibility to Thursday night's performance.

After pushing my way past the crowds of adoring fans clamouring for my autograph, and the paparazzi competing to get the best photo of me outside Fresh on Charles, I was quickly ushered into the green room (with its distinct lack of Perrier, note to Manager!) with the other VIP judges who were greatly impressed to be working with me.

Read more »
Posted by Wendy Newton at 4:53 PM No comments:

The streets of Launceston are transformed by art of every type thanks to the work of hundreds of school children and artists involved in the Streets Alive Junky to Funky Arts Trail. 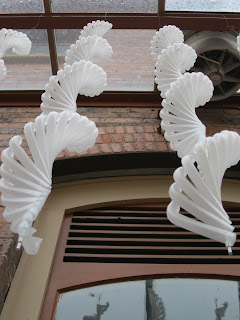 This morning I was lucky enough to have a private showing of the Art Trail, which has transformed spaces within the city to house artworks created through recycling and upcycling. Recycling is something we should all be familiar with but maybe upcycling needs a little explaining. It is about taking something, shifting it and creating something of greater value.

The familiar bells of Launceston’s iconic town clock rang to the tune of ten. A small but dedicated crowd began to close in on a seldom seen sight in the Brisbane Street Mall; a Table Tennis table. As I neared, I spotted the Mayor of our city, Alderman Albert van Zetten, decked out in a matching silver sports outfit ready to be the first opponent against Search Party’s Jodie Hawkes. After a rousing speech throwing down the gauntlet to the people of Launceston, Search Party’s co-creator, Pete Phillips, declared that the competition had begun.
Read more »
Posted by Patrick Sutczak at 6:30 AM No comments:

The city is unfurling like early spring blossom as I head into the Junction Arts Festival (JAF) 2011 launch.

I follow the long line of dreadlocks, fros, coifs, feathers-in-hair into the outrageously colourful big top of the Junc Room where artists, sponsors, politicians, volunteers and eager participants (like me) are rubbing shoulders; figuratively, literally. The formality is there, the speeches, the acknowledgements and thanks, but we're here to welcome in the festival, to experience the entertainment, and to feel a part of something bigger than we do in our everyday lives.

Read more »
Posted by Wendy Newton at 8:54 PM No comments:

Something a little special happened last night in the centre of Launceston and it all centred on a beautiful big circus tent smack-bang in the middle of Civic Square. It was opening night of Junction Arts Festival 2011: a chance for speeches, for celebration and some great entertainment. The tent was packed with an audience representing every demographic and the atmosphere was one of optimism and excitement.

A day of preparation

I begin my meandering on a sunny spring day to see what preparation is underway for Junction Arts Festival 2011 in Launceston. A Facebook message teases me with the prospect of seeing a huge inflatable whale in Princes Park, but instead I am drawn to Civic Square to see how preparations for opening night are progressing.


The Willow Cafe is already set up and attracting onlookers with its range of intriguing willow creations. A crew of Junctioners are busy putting the final touches to the Junc Room while the aroma of freshly brewed coffee is pumped out of the Two Hands Coffee stand. The ABC Online Producers are wrestling with their tent that will play host to a photobooth and voxpox of favourite places, while punters are already lining up to buy tickets for Barry Morgan’s World of Organs; a favourite for many from last year’s festival.

There is undoubtedly a sense of anticipation that makes me say ‘don’t you just love a festival?’ This excitement began the moment I sat down with a cup of tea to peruse the program, marking the events at the top of my list. Ping pong, Lazlo, Talking Skirts and Mr Happy all vie for my attention, and my aim is to do it all. After all, there is plenty of time for sleep later.


Posted by Kylie Eastley at 5:58 AM No comments:

The Scale of the Whale

Each year off the coast of southwest Victoria, a natural event known as the Bonney Upwelling occurs in which changes in wind and ocean currents draw in a feast of krill attracted by their primary food source, phytoplankton. In turn, the tiny krill attract the magnificent and mammoth blue whale, and, if you are lucky enough, you can catch a glimpse as they feed tens-of-kilometers off-shore.

It is fair to say that a great many of us who live comfortably on dry land rarely experience the opportunity to see the awesome sight of a blue whale, let alone up close - however, if you happen to be wandering around Launceston during the Junction Arts Festival, I guarantee that will change.

First created as part of the Portland Upwelling Festival in 2009, Mark Cuthbertson’s inflatable whale has now migrated to Launceston to the delight of anyone who should encounter her. I must admit, this full-sized whale is hard to miss; at 27 meters in length, Cuthbertson’s whale appears to swim on the spot as it sits in Launceston's Prince’s Square. The whale’s tail, towering high above, rises and falls as if propelling itself through an invisible ocean, its eye curiously peering back at those looking up at it. Crafted from parachute material and beautifully finished, the darkened flesh subtly draws breath as the discrete air-pump nearby keeps the scale of this majestic creature true.

Not only existing as a work of art, a project of this execution and accuracy simply begs to attract the curious of all ages. As I sat nearby and observed, children were playfully interacting with the blue whale while the Mums and Dads dutifully attempted to keep at least one eye on their children, while the other inevitably scanned the length, breadth and height of the whale - no doubt lost in their own awe of the fact that the average blue whale really is that big.

The easily transportable properties of the inflatable whale (I was assured that it fits inside a modest bag) will see it travel to four locations around the city during the Junction Festival, all of which, I am sure will add new points of reference in which to appreciate the size and beauty of this magnificent creature.

Posted by Patrick Sutczak at 12:16 AM No comments: