Grand-Final Eve at the Ballet 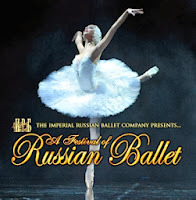 "I'm surprised there are so many men here." remarked the dumpy little Englishman on my right. "You'd think they'd be home watching the football". Then the curtain went up on a stage full of ballerinas in classical white, convincing us they really were snowflakes dancing to the music of Tchaikovsky's Nutcracker.

The Imperial Russian Ballet Company was formed in 1994. It includes dancers from ballet companies from all over the world and its repertoire consists of well-known classics. This year's tour features highlights from some of their full-length productions.

Reading the programme I was reminded a little of a Gala Concert I once attended in Prague – it was a performance for tourists, and they managed to cram the familiar bits of about thirty five major pieces into forty minutes, with pause for applause in between. My fears were soon allayed, however.

The first part of the programme consisted of various pieces from Nutcracker, with plenty of colour and movement. The Chinese Dance in particular was very bouncy and verging on quite silly. I even managed not to think (well, not very much) about Disney's mushrooms in Fantasia.
This was a slight problem. Music that is thoroughly familiar carries with it many memories and associations, and all that cultural baggage can be distracting. Still, ballet is absolutely about the dance, isn't it? So I set aside all former experiences with Ravel's Bolero, which was a good idea as after this evening I'm never going to hear it the same way again. 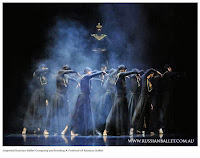 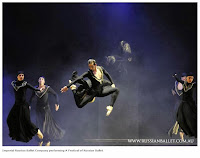 According to the programme notes, Ravel was inspired by a visit to a factory where he picked up the monotonous rhythms of the production line and the thuds and bangs of heavy machinery.
The composer did great things with it, weaving a strange, oriental melody over the mechanical rhythm. The choreographer N. Androsov exploited this dissonance, blending angular, repetitive movements with sudden leaps and whirls which become more and more frenetic as the music crescendoes to its crashing climax.
This has to be the most blatantly sexual piece of music ever written. Add to it a stage full of incredibly beautiful, athletic young people in sinister, flowing, gold-lined black robes performing an arcane pagan ritual dance . . . Miley Cyrus may as well give up and go home.

"Torville and Dean performed to that." the helpful little Englishman informed me. I suppose somebody had to say it.

After the second interval we watched a "trailer" for Don Quixote, which the Company will be presenting in its entirety in their tour next year, and I, for one, will be saving up for a ticket! This was followed by a series of short pieces where individual dancers or couples were able to show off some of their most spectacular artistry.

I seldom attend the ballet and am far from being an afficionado. If there was a false step or a hiccup in the timing, I remain blissfully unaware, being totally swept up in the spectacle. Dancer after dancer sprang high in the air, spun on point, twisted their body into elegantly impossible positions. High-energy performances to The Corsair and Gopak, the Ukranian dance from Soloviev-Sedoi's Taras Bulba with plenty of incredible high leaps, left me – let alone the dancers – gasping for breath.

For the William Tell Overture everyone dressed as fashionable ladies or jockeys, bounding around the stage on imaginary horses (don't think of the Lone Ranger OR Gangnam Style, please). Other excerpts included the romantic and poignant Giselle, San Saens' Dying Swan, a lovely solo to Ne Me Quittes Pas and as finale Offenbach's Can Can, with the tallest male dancer camping it up hilariously in drag among the Can Can dancers and roués. Everybody in the audience clapped along with great enthusiasm.

The Imperial Russian Ballet Company treated us to an evening of lavish costumes and the beauty and precision that only comes from dedication, discipline and extreme physical development. If you are excited by magnificent muscular bodies, excitement and energy combined with awesome physical prowess, forget the footy grand-final. You can get all that, plus grace, artistry, colourful outfits and stirring music in much more comfort at the ballet.
My English neighbour agrees. Ballet beats football on all counts.

about this tour
about the Imperial Russian Ballet Company
Posted by Elizabeth Barsham at 5:39 AM No comments: