WILD TIME IN THE OLD TOWN - A COMEDY OF ERRORS

The word “immigration” is displayed in lights above each pair of a row of double frosted-glass doors. A dispirited elderly man in charity-bin clothing – too-large trousers, shabby old-fashioned brown sports jacket - listens to a disembodied voice from a loudspeaker informing him that he has entered the country illegally and must suffer the mandatory penalty – death.

Fortunately, although some members may secretly applaud the idea, not even our new Government's Asylum Seeker policy goes quite as far as the opening scene of A Comedy of Errors.

It's always fun to see a fresh take on a well-known classic, and this time Shakespeare's ridiculously over-the-top story of separated twins, mistaken identities, outraged women and eventual family re-union is set, ostensibly, in Kings Cross. The Bell Shakespeare Company has created a surreal and sleazy world of suspicion, double-dealing, physical violence, sex, superstition and religion where employees are beaten with impunity, police officers obligingly arrest people on request, and time is manipulated to suit the plot.

The frosted glass doors become in turn entrances to pawnshops, brothels, nightclubs, an apartment block and finally an abbey. Shadows moving behind the glass suggest lewd and suspicious characters lurking in the background.

There are ladies of the night of questionable gender, “merchants” who surely deal in substances other than gold, a gangster Duke whose command must be obeyed and various other dubious figures – the ten-person cast make a lot of very quick costume changes!

Doors also provide plenty of opportunity for standard slapstick situations: pratfalls as people run into them, other people hiding behind them, almost the entire company at times chasing each other in and out of them.
The comedy is fast-paced and beautifully timed, in particular the chase scene. Everybody, getting completely off their faces at a disco, huddles together for a drunken group "selfie". Only when inspecting the result do the women realise the two men they have been pursuing are right there - in their photograph! The chase resumes . . .

Nathan O'Keefe and Septimus Caton play the Antipholus twins, becoming progressively more confused, angry and alarmed as strangers hail them as old friends and friends attribute to them conversations they can't recall.

Renato Musolino and Hazem Shammas, in Bogan uniform of beanie, flannie shirt, runners and trackie dacks, are the Dromio twins and play the Shakespearean ill-treated clown with the appropriate mix of enthusiasm, indignation, resentment and bad puns.

As Adriana, Elena Carapetis is splendid in skin-tight leopard-print top with matching car-to-bar heels, and Jude Henshall as Luciana makes her entrance reclining on a tanning bed wearing a very skimpy bikini and a large set of headphones. They both succeed in being delightfully dreadful.

Suzannah McDonald is very funny as both the Courtesan and Emelia; I particularly enjoyed her lisping Abbess.

Combined with the formal language of Shakespeare, the incongruity of exaggeratedly showy and tasteless costumes and twenty-first century sun bed, washing machine, exercise bike, ping-pong tables, digital cameras and mobile phones transports us to a dystopian alternative reality where the ludicrous series of misunderstandings and coincidences becomes feasible and believable. What a wonderful romp!

Posted by Elizabeth Barsham at 6:35 AM No comments:

It seems practically every artist I meet these days lives on Bruny Island or at least has a holiday house, and there is even a flourishing private gallery at Dennes Point providing encouragement and incentive for those wishing to exhibit.

Rediscover Bruny is a three-part event organised by Bruny Island Arts to raise awareness of the quality and diversity of art being produced on the Island and has almost a hundred participants – not bad, when you consider there are only seven hundred people living on the island, and there are many more artists there who are not included.

40 Artists from the Island opened on Saturday afternoon (21 September 2013) in the Long Gallery at the Salamanca Arts Centre in Hobart. The quality of work in this exhibition of paintings, drawings, prints, sculpture, textiles, assemblages and more by forty visual artists from Bruny Island is very high, with some particularly striking sculptures and mixed media works. I believe at least two artists have been approached to exhibit in a commercial gallery in Hobart. 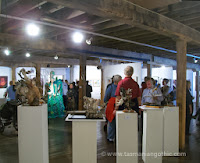 Bruny Island Arts was formed early in 2000 and the first exhibition was Artists from the Island, held at Adventure Bay. This was followed by a Kids' Art Zone which proved immensely popular. The first Rediscover Bruny event was an Art Trail on Bruny Island three years ago, and another is proposed for 2015.

Of course, not all members of Bruny Island Arts are visual artists. Besides exhibitions they stage performance pieces, cabaret, plays and musicals. A film society, formed after some old projectors were found at the tip, organises film nights with a local musician accompanying the occasional silent films. The aim is to be as inclusive as possible, welcoming artists from both North and South Bruny! It's nice to see good old Tasmanian tribalism is still alive and well.

In keeping with the policy of inclusion, the Sidespace Gallery holds a charming exhibition of Childhood Treasures, precious objects people have treasured for most of their lives: teddy bears, dolls, puppets, building blocks, favourite books, each with an explanation by its owner telling us just what makes this particular item so special.

The Hobart event brings Bruny Island to the city; this city dweller, for one, will be heading down to the Island for the Art Trail in 2015. However, I might have to make a few trips down there well before that to visit the gallery, the cheese and chocolate factories on the way to the Pioneer Museum at Adventure Bay and the isolated Cape Bruny lighthouse. Not to mention taking some of my favourite bush walks. Perhaps I should move down there . . .

For more information:  www.brunyislandarts.org.au
Posted by Elizabeth Barsham at 8:10 AM No comments: