Pip and Pooch, the fun new primary schools touring show from Terrapin Puppet Theatre, is a wonderful child’s-view story about friendships and man’s – or, in this case, girl’s – best friend. For Pip, life is not easy as she negotiates the difficulties thrown up by a bizarre array of family and foe as her birthday party approaches. But when Pooch arrives things begin to improve. 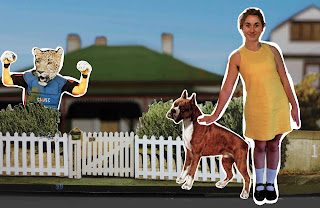 The energetic engagement of actors Bryony Geeves (Pip) and Matt Wilson (Pooch) had the children in the audience enthralled and laughing right from the start, with their clever silliness, heartfelt real-life reflections and crazy puppet characters. I particularly loved the two-dimensional cut-out puppets with their simple choreography of arms and legs, and smiling / frowning magnetised faces which were removed like layers to reveal their changing emotions. It’s amazing how engaging a talking puppet without a moving mouth can be!

Expertly designed and realised, this visually beautiful show has a quirky aesthetic which
seamlessly combines the two- and three-dimensional worlds of photorealism, live characters and magazine cutout animation, to create a somewhat surreal yet warmly familiar visual world. The horizontally layered set skillfully allows for the various perspectives and elements of the story to blend smoothly on stage, moving from mini street scape with characters at front, through Pip’s cut-out full-scale girly bedroom, to a projected streetscape at back of the mini set at the front ( as well as doubling as an animation screen). Its quite a treat to see.

This technically complex show is full of delights and enormously engaging.
Terrapin’s new Artistic Director Sam Routledge has managed to strike a beautiful balance between the multimedia gadgetry, live action and much wonder-filled puppetry .
I look forward to seeing more of his shows.
Posted by gai anderson at 2:54 AM No comments:

THE TABLE OF KNOWLEDGE

I was looking forward to The Table of Knowledge at the Theatre Royal on Friday night, as I have seen some really exciting examples of Verbatim Theatre previously interstate, but never before in Hobart.
Verbatim Theatre is a documentary form where the story onstage is constructed from the precise words spoken by the people interviewed about the event in question. The playwright or collaborators (in this case) then make choices about how to structure that material in order to create meaning and get to the heart of the drama.

Creating a piece of Verbatim Theatre is no doubt a complex and challenging process, but unfortunately in this co production, created and performed by the members of Version 1.0 and Merrigong Theatre Companies, it doesn’t really work and the drama of the story is lost amidst an endless flood of words.

For me the attraction of Verbatim Theatre as a form is that the content is real, and the emotional journey of the characters is alive, full of passion and emotional truth. Think Alana Valentines Run Rabbit Run, about the south Sydney Football Club demise, for example. Here the words of the both the big bosses and the Jo average supporter are all heard colloquially, and structured together to subtly expose the drama underneath.
But in The Table of Knowledge, a story of council corruption and a big nasty developer in Wollongong, the choice to focus on endless beaurocratic language and double speak doesn’t allow the real characters to appear, and so the show loses its passion from the start. Structuring the drama as a court-like question and answer enquiry for much of the piece added another layer to this disconnect.

The strong group of performers worked hard and their punchy pacing did create a sense of momentum and physical energy, particularly when cutting out of verbatim into interesting moments of abstracted action. There were some great vignettes ,and  at times the beautiful projections of animated architect style drawings , sometimes combined with seascapes added an atmospheric layer. But for the most these interludes felt like bitzy distractions with little connection to each other or the main drama, their potential poetic possibilities underutilized, which was a shame.

Whilst there was an attempt to reconnect with the colloquial in the second half, where the main victim’s real thoughts as a single mother are finally revealed in the short lunch room scene, its too little too late for me and I dont care about her predicament.

There were some great moments and sustained performances in this production, but it perhaps suffered from its collaborative nature and the lack of one clear voice.

Posted by gai anderson at 12:49 AM No comments: