On entering numinous- i, one is invited into a space of sanctified quietness. A series of large, busy, Primitive-esque paintings by David Howard encircle a suspended black box, containing Darryl Roger’s hologram piece, Sehnsucht; and so, pagan visions surround the tabernacle. A sense of ritual undoubtedly informs both sets of work, yet is manifested quite differently in each. Howard gives a wild, uncontained spilling-forward of figures: as if spirits have seeped from the canvas into the gallery space. The shapes seem to balloon before one’s eyes: the image is full of gaseous intensity. Rogers provides a far more internal experience. One must enter his space; the art becomes a kind of confession-box and, as such, the surrounding area of the gallery begins to concave in on the box. The coupling of these two artists is something like the coming together of the voodoo and the sacramental, to create a meta-spiritualism.

Essay by Gillian Marsden
Fragments of King sees artist Marisa Molin again traipsing the periphery. This time, the shores of the other leader of islands laid out in the Bass Strait like a game of solitaire: King.

Years prior to Marisa’s visit, the debris of a biological phenomena (interestingly, more commonly associated with Flinders Island of the last Fragment series), had swung wide and swept up on the shores of King Island, mirroring the many ships that had gone crooked and drowned against the island throughout the nautical-dependent years of the 19th and early 20th century. This echo of doomed passage continues through nomenclature and mythology for in fact, in both intact and shattered form, the biological phenomena was that of another kind of ship; the discarded shells of the Paper Nautilus or Argonaut nodosa*.
There is something wonderfully paradoxical about the Paper Nautilus. We are predominantly acquainted with their exterior remnants and by the time such remnants drift ashore (somewhat mysteriously every few years and in their thousands), their soft interiors are long rotted out. In our minds, we hold the name, ‘paper nautilus’, and in our hands, exquisite pressed-tin shells of la mer: no wonder we imagine ethereal creatures that glide through the water like elegant ships and yet, the Internet outs the Paper Nautilus as actually, a jaunty, dinghy kind of vessel and the animal itself, as having a vertically flattened face and a feature that can only be described as a proboscis or snout. I think this is a paradox that is emblematic of the dualism of imprinted surfaces: where one side is raised, the other is depressed. Where one side is intended for appearances, the other is utilitarian and circumspect.
Read more »
Posted by Kylie Eastley at 2:06 PM No comments:

There was a palpable excitement in the Backspace on Saturday afternoon as I took my seat amongst the groups of primary school aged children and their parents for the latest show from Terrapin Puppet Theatre - Red Racing Hood. Some it seemed were back for a second time! It was great listening to the thrill in their voices as they discussed how the complex action we were apparently about to see, could possibly have been animated by just 3 puppeteers on the curious retro-looking domestic set waiting in front of us.

Written by Sean Monro and directed By Sam Routledge, Red racing Hood is a simple story writ-large, about a girl called Red and her Gran. Quite cartoon like in feel, with miniature racetrack and a heightened performance style, it uses the archetype of the dangerous wolf in the woods as a foreboding threat hanging over their small country town of Grinalong. The twist is that Gran and the young Red are racing car enthusiasts, and their lives are soon turned upside down by the arrival of a new mayor with big ideas for the restaging of the Grinalong Classic car race.

Reliant on design as much as story and character, the quirky, cleverly designed set allows the 3 talented performer/puppeteers to inhabit and animate this action-packed show as it jumps between scales and atmospheres, between racing action and domestic drama. And so, the domestic scene of Red and Nans home cleverly transforms to become a miniaturized 3 D model of the town, complete with racing track and dangerous woods. And their breadbox becomes the garage for Nans tiny model retro racing car and the toaster becomes the town hall. A tracking video camera and large screen allow the audience to jump between scales, for close ups of the racing action as Red transforms to become the driver of Grans tiny racing car.

The performances of Maeve Mhairi McGregor as the vivacious young Red and Thomas Pidd as the vaudevillian-like Mayor (and dorky policemen) drive the fun and action- filled parts of the show, with their heightened energy and clownish verve in synch with the shows cartoonish style. The more realistic style of Grans character in contrast seemed lack lustre at times and I wondered about this choice. The potential of the central human drama is also less developed than the action which left the story a bit thin for me.
But it is hard sometimes as an adult to appreciate a child’s-eye view of theatre such as this. So as I sat there wanting the beautifully animated wolf to be bigger and to actually scare me, the screams of fear and delight from the front row of the children as it got closer to them, quickly changed my opinion on that.
Overall this is a great children’s show, perhaps perfectly pitched for a primary school audience, and the audience I sat amongst certainly loved it.

Posted by gai anderson at 9:27 PM No comments:

Imagine the person you lost your virginity with ended up being not the one you married, but the one with whom you have an ongoing, if intermittent, affair – sometimes exhilarating, sometimes disappointing. Well, that’s how it is for me and the theatre.
I’m talking about real theatre, live theatre, the sort that I fell in love with as a teenager, back in that phase of life when too much was never enough. Although we’ve drifted apart, the theatre and me, still there are moments when we reconnect. We sometimes see each other here in Hobart, but not as often as I’d like. Mostly it’s when I’m off the leash and travelling that I make the effort to get in touch. Sometimes, I worry that we’ve permanently lost the magic, but then I’ll see a play good enough to set off a bunch of well-rehearsed chemical reactions in the brain and there it is: love all over again.
I’m guessing no-one at the Tasmanian Theatre Company knew that when they asked me along to their show Sex With Strangers, and to write something about it, the invitation was, for me, a little like getting a phone call from an old flame.

So, Sex with Strangers. The title alone is a come-on, and it’s worked for Ethan (Samuel Johnson), who’s made the New York Times bestseller list with a blog-turned-book that chronicles the outcome of his boast that for a whole year he could, each week, pick up a girl in a bar and get her to have sex with him. Ethan’s now rich and successful, with a powerful internet reach. But his dirty secret is that even he holds the vehicle of his success in contempt, and would rather be a literary novelist, like Olivia (Tottie Goldsmith).
Read more »
Posted by Kylie Eastley at 2:26 AM No comments: 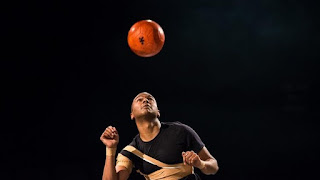