On entering numinous- i, one is invited into a space of sanctified quietness. A series of large, busy, Primitive-esque paintings by David Howard encircle a suspended black box, containing Darryl Roger’s hologram piece, Sehnsucht; and so, pagan visions surround the tabernacle. A sense of ritual undoubtedly informs both sets of work, yet is manifested quite differently in each. Howard gives a wild, uncontained spilling-forward of figures: as if spirits have seeped from the canvas into the gallery space. The shapes seem to balloon before one’s eyes: the image is full of gaseous intensity. Rogers provides a far more internal experience. One must enter his space; the art becomes a kind of confession-box and, as such, the surrounding area of the gallery begins to concave in on the box. The coupling of these two artists is something like the coming together of the voodoo and the sacramental, to create a meta-spiritualism.

It is from this that we can consider both artists in a dialogue with Magritte’ian surrealism. In both works, one figure slowly morphs into another. In Howard’s paintings this transition is spatial. Thick coils join one shape to the next, springs jump out from the background and various substitutions – a saucer for eyes, a river for a tongue and the face divided like tectonic plates- form conceptual links between shapes. What Howard makes apparent is that the mind does work to see saucers in eyes and connective “coils”, that is associations, between the objects in our world. 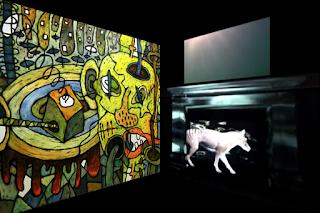 Rogers achieves much the same effect in the temporal. His hologram is projected onto a model stage, allowing a pantomime of associations to unfold. Against a backdrop of ocean, a moon superimposed by a sheet of clouds sits. On looking at this collage one cannot help but separate the elements: a moon sits above the sea; a moon lies in the sky with clouds. Each still forms a condensation of associative imagery: a reduction of common memory into a code. And yet nothing stays still. The moon fades into brick, the brick into wild dog. If in automatic drawing the hand is allowed to move freely over the page, then here we have something like automatic theatre: the show moves freely from one concept to another, following the thread of a playful mind.
Through its bold and heavy forms, Howard’s series brings Surrealism back to its Cubist and Primitive roots. The shapes in the work push out from the canvas, tense behind the picture plane, bouncing off its surface. The small sections of titanium white leap out at the viewer, above the collection of deep greens, yellows and red. The images appear to bubble to the surface, pushing against the picture plane. Like water boiling beneath the lid of a saucepan, the tightness of Howard’s painted forms creates a repulsive force against the eye. The paintings provides a retrospective insight into this repulsive nature of surrealism and the surreal nature of the repulsive: often we say of something strange, a dream perhaps, that it cannot be grasped and that it seems to work against one’s memory.

On the other hand, Rogers brings Surrealism forward to what may be considered its natural conclusion: the virtual realm. In digital art, images can be collected, stored and re-arranged with great ease; pictures of different times and places can be brought into the same space with the click of a button. As Rogers explains, many different images stream into his process:
My digital art is approached like a collage. I collect images, video, 3D meshes and other art works that interest me, over a very long period of time. The video imagery in Sehnsucht was collected from disparate times, a holiday in the Whitsundays, a walk on a beach in Tasmania, a chance connection with a 3D modeler in Madrid. (Darryl Rogers, 17 October 2015)
If we consider the various images one sees on a computer screen, associations between them are not necessarily pre-ordained but generated by their collection in the one space. In other words, Rogers’ images are not products of a singular theme but hold a potential to create a number of different ideas, depending on their arrangement. In this way, a “memory” between objects is creative: one does immediately know the connection between the sea and a brick wall but is forced to create one; both can shield objects from view, perhaps.
However, the spiritual is not merely the surreal but also the ritualistic. Here it is worth considering the use of repetition in both artists’ work. In Howard’s paintings, rhythm bounces form one canvas to the next. As a series, one might be tempted to think that Howard’s work is monotonous: that each canvas is very similar to the next. However, what may appear at first to be repetition is, more precisely, insistence. In Gertrude Stein’s famous line “a rose is a rose is a rose”, one does not hear “rose” in monotone but with a varying stress on each repetition. Similarly, each canvas by Howard embodies a different character; has a different stress to it, one could say. Motifs are carried throughout the series, in particular, wires and coils. Yet from painting to painting we see wires thicken, coils accumulate and spirals tighten.
The repetition in Rogers’ work is more dreamlike, as if following a steady mantra. The transitions from one frame to the next are regular and slow. Sehnsucht is a German word that means to long for a home never able to be obtained. It is to feel a kind of dislocated nostalgia: to miss something without knowing precisely what that object of desire is. Watching Rogers’ work for a few minutes entails seeing repetitions of the video. After a while, one cannot remember whether the memory of an image in the hologram originates in real life or from a prior cycle of the tape. The work is not only about a dissociative memory but in fact induces the very feeling of sehnsucht in its rhythm.
The exhibition lives up to the expectation set in its title. Both artists achieve that specific combination of dream and ritual embodied in religious sensation. This is a show that matches its theory with competence and beauty.
— Jugglers 19/10/15
Posted by Kylie Eastley at 2:59 PM