Alison Mann’s first full-length play, She’s Not Performing, weaves a handful of lives around its central issue: the long-term impacts and aftermaths of forced adoption. The play broils with the anger and loss which is a daily part of life for Margarite (Sara Pensalfini), decades after giving up her daughter for adoption. Her unresolved pain ricochets and reverberates violently into her relationships with both her current boyfriend Ian (Campbell McKenzie), and also Hamish (Joe Clements), a connection from her past. Bryony Geeves completes the quartet as Annie, a young stripper Margarite becomes preoccupied with (thinking perhaps Annie could be her daughter).

Director Belinda Bradley has handled some of the most sensitive scenes gently, allowing the story to bleed from its characters at just the right pace, and integrating a sometimes addictively claustrophobic and suitably nightmarish soundscape by Matt Warren. In other places, however, the actors don’t yet seem to feel comfortable in their roles, and a certain hesitance and lack of connection to the text occasionally forms a barrier to audience empathy. The minimalist design and moody yet unpretentious lighting serve effectively as each of the different settings, but also leave the actors quite naked (sometimes literally) in the moments where they are not yet at ease.

The production is at its strongest during the scenes that depart from reality in one way or other: in dreams, memories, flashbacks, fantasies. During these sections the cast seem more willing to take risks, the dialogue – perhaps ironically – sounds more real, and all the production elements come together powerfully.

The season should bring more cohesion to the relationships and allow the actors to fully embody their roles, as well as develop the moments of humour in the script which cautiously poked their way through the fury in this opening-night performance.

She’s Not Performing is presented by Tasmanian Theatre Company and will continue at the Theatre Royal Backspace until November 29, 2013.
Posted by Kylie Eastley at 5:12 PM No comments:

A Cloud in Sawtooth

I move around the walls of the @Sawtooth space. The gallery is closed. The fluorescents are off but there is ample morning light washing in from skylights above. I have come to meet someone but I am purposefully early so that I can revisit the work by Phoebe McDonald for a second time in silence. 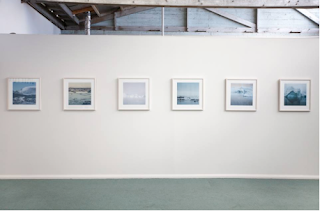 I pause at each photograph and peer in, perhaps trying to let the frame and the wall behind it dissolve in an attempt to transport myself into the isolation. It doesn’t work of course. I am not going anywhere. These images in the first instance (or even the second) are of familiar things - beautiful things to be sure, but familiar all the same. Distant and precious, the Arctic ice is the very epitome of global conservationist imagery. Lose that and we lose everything. From National Geographic to Instagram, the ice is never far away. It is certainly easy (forgivable even) to see the images for what they appear to be.

With A cloud can never die however, I look more closely and see something else entirely. I continue to visit each photograph and the next, and then I go back to each one again. I know that I am not simply looking at the ice, but rather the light upon the ice at play with a complex series of natural convergences. McDonald has an impressive eye, and an enviable patience. Nature rarely behaves the way we want it to, yet McDonald has recorded images that portfolio her artistic research interests.

The works on exhibition on the walls of the @Sawtooth space are not only stunning for their subject matter, but for their compositional integrity through vision and decision. Landscapes are so often passed through and never lived in, and this is why I think the artist pulls the breaks for us, places a hand upon our chin, turns our head from forward and says ‘Look’.

This is what I am seeing as I move around the walls – the unpredictability of natural forces and the fleetingness of light. Set within the frame is the moment that McDonald placed her finger on the button and captured the instant her heart beat the loudest. Amidst the inevitable change and conditional circumstances witnessed by being there, was a moment that sang to her, or so I believe. With the ever-changing ice, the turbulence of a shifting landscape, the hovering mist and the seductiveness of water, these elements seem to appeal to McDonald’s ongoing fascination with shadow, sunlight, and the subtle transformation of natural landscapes.

This review was first published on the Sawtooth Ari website www.sawtooth.org.au
Posted by Kylie Eastley at 2:45 PM No comments:

The unSUITable CASE of me

I went to the historic Sorell Memorial Hall on Friday night to see The unSUITable CASE of me, a touring production supported by Tasmania Performs. The music was by Dean Stevenson, an accomplished singer and songwriter who is also a tutor at the Hobart Conservatorium of Music. The story was by Finegan Kruckemeyer a playwright who has had 65 plays produced. So it was with high expectations of a distinguished parentage that I saw this work.

The stage was simple, yet effective. As this is a show that is touring around our Apple Isle it is important to have a clean, simple, easily moved set. An uncomfortable chair, a lamp, a few cases here and there; bits and bobs made up the set. Designed by Selena de Carvalho the set succeeded in creating the atmosphere of someone on the edge of a leave-taking.

Everything in the play combined to create the idea of a journey. This was the focus of the work. A young man, recently separated from his lover goes out into the world to get back into himself. This allows the hero to move across space and time thinking about his life and the choices he made, or had been made for him. Searching for that impossible moment that can be played again, but differently this time making everything better.

The music was performed by a string quartet; Yeun Yum violin, Jeremy Williams viola, Timmothy Osborne cello and Hamish Houston double bass. This was for me the highlight. There is very little I enjoy more than listening to, and watching, a string quartet. The flowing sounds of the strings mesmerise, while it is a feast for the eye to see the various techniques the musicians use to create the range of sound. Striking, bowing, plucking all add to a soundscape that is as much a conversation between the instruments as it is the background for singing.

The story itself is a simple one of loss and reconciliation; the hero reconciling with himself and, at the end, meeting her and reconciling the broken relationship. No final conclusion is made as to their reunion and in the best tradition this point is left hanging, allowing the audience to make that determination themselves.

As the broken hearted man, Dean Stevenson used his voice and his movements on stage, to show the pain of heart break that most know only too well. In all it reminded me of the album Dark Side of the Moon or Elvis Costello's Imperial Bedroom.

This work understands that period of life, usually in the late twenties or early thirties, when one realises that the dreams of childhood will never come to pass. That one will never be an astronaut, nor will one ride off into the sunset with a woman with long red hair. None of us will live happily ever after.

The unSUITable CASE of me is currently touring regional Tasmania as part of Tasmania Performs. More information at http://www.tasperforms.com/welcome/the-unsuitable-case-of-me
Posted by Kylie Eastley at 8:51 PM No comments:

Email ThisBlogThis!Share to TwitterShare to FacebookShare to Pinterest
Labels: Dean Stevenson, Finegan Kruckemeyer, Tasmania Performs, The unSUITable CASE of me

Artfully crafted for children, the work by performers and devisors Christy Flaws and Luke O’Connor had the kids enthralled and laughing for nearly an hour. The comic timing and element of surprise was spot on in this daringly simple and powerfully evocative show.

The set is made of brown cardboard boxes, seemingly in a haphazard arrangement. A theme of reading random letters and postcards creates intersections of instant cultural travel, enhanced by suggestive musical transitions and a warm colourful lighting design.

The show is a playful flow of fooling around with a wind-up toy, a feather duster and nifty sequences of throw and catch with boxes of varying sizes. The characters perform circus-esque acrobalance, and their sweet and quirky contrasting styles grow on the audience throughout the show. Christy Flaws contorts and sculpts her deliciously gruesome monster expressions out of her otherwise very pretty face at skilful intervals, keeping the joke alive and very amusing.

“This is a funny show,” my four-year-old frequently repeated, while my two-year-old was intrigued by an Australia Post box which mysteriously descends and ascends a couple of times from the ceiling. There was a fleeting moment of “I’m scared” which evaporated with the ongoing playfulness.

Bubble Wrap & Boxes was refreshingly untechnical and didn’t try to cater for or please adult intellects. The joy for parents, grandparents and carers was to hear the laughter of so many children as the whole audience experienced beautiful and hilarious theatre. I almost forgot about the bubble wrap… but go see the show and compare the different ways it pops.
Posted by Lucy Wilson at 3:26 AM No comments: