Something a little special happened last night in the centre of Launceston and it all centred on a beautiful big circus tent smack-bang in the middle of Civic Square. It was opening night of Junction Arts Festival 2011: a chance for speeches, for celebration and some great entertainment. The tent was packed with an audience representing every demographic and the atmosphere was one of optimism and excitement.

For the Launceston Youth and Community Orchestra who opened the entertainment, the event allowed a different audience to experience their work. And didn’t the crowd love them as they filled the Civic Square with the big, brassy and ballsy renditions of classics. They were followed by the Transylvanian Gypsy Kings, a trio of machismo rich, mono-browed Romanian rockstars. Their musical talent, which is considerable, was matched by their humour and my only disappointment was that I couldn’t hear some of the witty dialogue - which would have been worth hearing. Female members of the audience were passed fliers that promoted Nicu, Lucian and Zurka, all in search of a bride, who, preferably one who shared their love of ferrets. 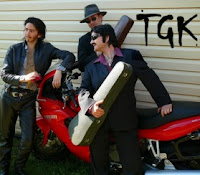 It seemed nobody wanted to go home last night, with plenty of people taking time to experience the work of Jim Coad’s Video Architecture, projected onto the side of the State Library and married with the ruminations of DJ Kashishi (Dane Hunnerup) who provided an audio melting pot with indigenous, Brazilian and Sufi influences.

Next door a small troupe of committed artists worked late into the night in The White Box Experiment, painting and inviting others to join them in covering the many white canvasses that lay waiting.

I wouldn’t normally dwell on the speeches, made earlier in the night in the big top, but there were three points made by three different speakers that were important. The first was from Minister Michelle O’Byrne. It’s always great to see a politician genuinely excited, and why wouldn’t she be, especially when given the task of announcing to a local crowd that the state government will provide $600 000 to Junction over the next three years. Great news for a fledgling festival and particularly for the north of the state which has, until now, been a little neglected in this area.

The second point was from Tasmanian Regional Arts President, Lee Cole, who stressed the importance of regional community arts in festivals and the integral role that volunteers play in putting on such events. And the third point was made by Artistic Director Ian Pidd who made his pronouncement that...

As a passionate optimist and idealist (well most of the time), this statement particularly resonated in a financial environment where festivals can sometimes be seen as risky. Festivals are challenging to fund, difficult to produce and can be tough finding the audiences. But it is crucial that they happen and that they do bring new concepts, experiences and performers to existing and new audiences. They also provide an opportunity to showcase local and regional work that may not otherwise be given a platform.

Opening night gave us a taster of what is to come over the coming days and nights. While I pulled the pin around 10pm, there was still a good crowd in the Junc Room and every indication that more were on their way to experience The Lawless Quartet. A successful opening night for this festival.
Kylie Eastley
Posted by Kylie Eastley at 6:33 PM