Dole / Dolour: An Allegory for the Fifth Corner of the World

σκότος ἐγένετο ἐπὶ πᾶσαν τὴν γῆν
In the evening
after work,
shadows fall
across the world.
And the city quiets
And calms itself.
And now the city is ours
The weak and broken ones
Come out to play
Take over the city.

Went to the Top Gallery in the Salamanca Arts Centre, a small room torn brick, convict sandstone, rough wood. A room that echoes the cries of those worked to death in the old days. Drunk and trapped. The scrap heap. Dolour -- endless unhappiness. This seemed an more than suitable place for these particular art works.

I went, as an invite to see an exhibit of photographs by Liam James passed across my facebook feed. The exhibit was called “Dole / Dolour: An Allegory for the Fifth Corner of the World.” I was instantly intrigued by the title, and normally I do not like photography as art. This is simply my hang-up and I apologise to photographers the world over. For me too often it is simple point and click, a mechanical reproduction of an object, allowing no understanding of the maker, of the ideas behind the work. 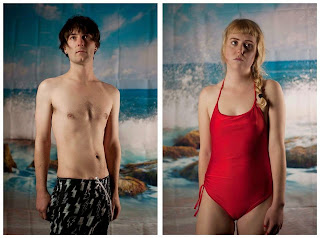 With this exhibit more was involved. Not simple happy snapping, not facile photoshopping. The photographs were all well thought out and the artist seemed to have something to say, and to know what that was. These are the photographers of a maker, rather than a reporter, or a decorator.


Dole / Dolour, sorrow, emptiness, no future for you. There is a time, about the age of twenty five, when many us, (those of us that think and do not just follow) come to the conclusion that all the word worlds of teachers and parents -- that one can be what you want, that is just takes perseverance and commitment -- were no more than big fat lies. Work will not save us, love will not save us, our future dream is a shopping scheme.
A future rolling forward of endless cycles of waking up, coffee, work, lunch, work, Friday nights drinks down the local, all leading to the goal of self imposed debt bondage. Marriage, house, children. And finally pointless, stupid, inexorable death.
Liam faces this future squarely, without flinching. His wonderful, well staged, well coloured, crafted photos bring these feelings of relentless boredom, of pointlessness to our gaze. His works shows how all this drabness is wrapped up with a system of objectification. And how it is that many of us desire, more than anything, our own slavery, fighting as passionately for slavery as for liberation.
The subjects of his photos are mostly young men and women, and they avert their eyes from the gaze of the (assuredly elder, assuredly judgmental) viewers, looking up, down or off in the distance. Looking one thousand yards past the viewers into a doleful future.
When the subjects do look at the viewer, it is with irritation, with anger. 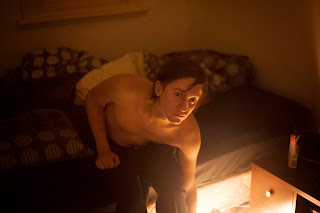 The artist, in his statement, wants to search for a new national identity, this is an important goal, as all around a reinvigorated national identity of spite and fear rises. This triumphalism gives birth to, and counters the art works, sets the scene, frames the works, and holds us in it's embrace as we step outside the gallery, back into a world of objects, processes, statistics, and prices.
This is an interesting and provocative exhibit. An exhibit which on first glance appears simple, but over the days and nights will slowly chew into your brain and make you question the world of objects.
Dole / Dolour: An Allegory for the Fifth Corner of the World is on display until the end of the month, until 30 October. You can visit a web site that Liam James maintains.