I went to the RACT Insurance Tasmanian Portraiture Prize award night. This competition is the result of a highly successful partnership between RACT Insurance, Clemenger Tasmania and Tasmanian Regional Arts. Looking at the variety of works on display, one can safely say that the future of portraiture is safe in Tasmania. This exhibit is more vibrant and daring than similar prizes.

This award takes a different path than most portraiture award. A few things stand out to make this award unique. Quoting the Conditions of Entry, “The submitted work must be a titled portrait of a living Tasmanian.” This has the effect of making the prize a local prize. This can be both good and bad. Good in that it supports local artists, who due to the nature of the world tend to get swamped by the sheer size of the north island. Bad in that it feeds on an isolating tendency. What you wish to give weight to is, of course, up to you; but for me I would support the idea of a prize that seeks to support and nurture local artists. As we live in a world based on the idea that big eats little, sometimes little needs a helping hand. How else can little mature and start devouring.


Due to the nature of portraiture it often behaves as a sort of aorist medium; an exploration of the past, the contemplation and mulling over of a life, of past achievements. To overcome this tendency the RACT Insurance Tasmanian Portraiture Prize conditions stipulate that the artist must be under thirty. As youth are inherently forward looking, this stipulation is fabulous, in that it provokes a disruptive alchemy. A work like this year's winner would not be allowed in the Archibald Prize, due to the condition that the painting, “Must be a portrait painted from life, with the subject known to the artist, aware of the artist’s intention and having at least one live sitting with the artist.”

A third aspect that to me makes the prize unique is the emphasis on submitting a short (300 word) artist statement, describing the reasons the portrait subject was chosen. This statement is an important part of the process, as it helps determine the intention of the artist, and if the finished work has accomplished that intention. It allows us to understand the inspirations that flow around and artist, and their works.

There is no point in trying to describe all the paintings in an exhibit of over thirty works. I will only mention the works that won awards on the night. 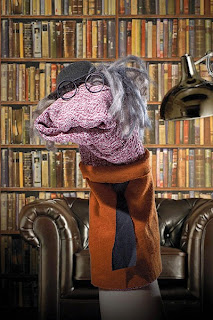 Jesse Hunniford won the inaugural Packer's Prize for the work “Am I a Man or a Puppet?” This work, described in the statement as “a visual and physical journey into childhood and paternity through textiles and the act of making”, is an example of how the artist statement and the work -- a photograph of a hand puppet -- combine to create a new form of portrait. It is also important to note that a work such as this may have not been allowed in many other Portraiture Prize competitions. 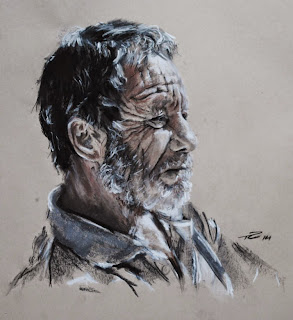 The Sponsors Choice award went to Tilly Cough of West Launceston for the work “Dad.” A beautifully rendered pastel drawing of the artist's father. A work that seeks, -- here I am paraphrasing from her statement -- and succeeds in finding the flaws and roughness of her subjects, the imperfections that make them perfect. 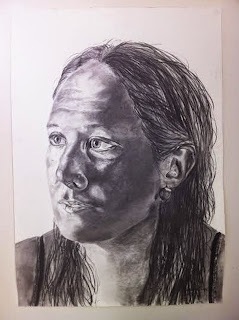 The 2014 runner-up prize was awarded to Shannon Terry from South Hobart, for her work “A small idol of mine.” A pencil drawing of her cousin Sarah. Shannon said, “The lens in which she views the world is one of which I admire immensely. She holds strong views in politics. Symbolically, the grey I create serves to remind us that there is neither a black nor white perspective in life” 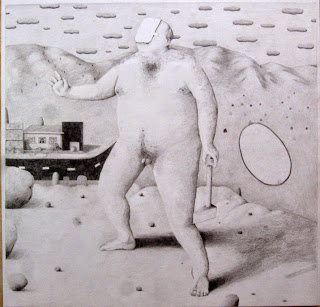 The winning work this year was by Cameron McRae, of Hobart, with a work he called “David Foster enters the Burnie Betta Milk Wearable Paper Art Prize.” This was a cheeky, satirical, amusing look at recent events in Tasmanian political history through the medium of portraiture. Again, this sort of work would not be allowed in some other competitions. Which makes one wonder if a trip to next year's Archibald Awards is actually a good thing or not. The paintings will be on display in Hobart at the Long Gallery until the 5th of October. It will then travel to the Sawtooth Gallery in Launceston, from Friday 31 October until Saturday 22 November. Finsihing the tour at the Burnie Regional Art Gallery, in Burnie from Friday 12 December until Saturday 31 January. This exhibit of young Tasmanian talent is definitely worth a look!
One could argue that the last 20 years of history have been an attempt to destroy our spirit of co-operation, our spirit of optimism. The youthful, daring, amusing, satirical, experimental nature of the works on display prize can act as an antidote, a pharmakon, a charm, to protect what can be protected from this world-historical fear.
I will leave the last word to the winner, “I said that if I win I would be able to insure my car, so this a win all around.”
I want to thank my pal Ian Milliss for helping me to clarify my thoughts (like turning butter into ghee)
To see some other media related to this exhibit: Tasmanian Times, The Hobart Mercury non-story, and an amusing example of victorian prudeity from The Advocate.
The photographs of the art works come from the TPP website.