Who's Afraid of Virginia Woolf?

With cars left behind in the safety of a Sandy Bay car park, we boarded a minibus and rode through the streets of Hobart’s well-appointed middle class into another era. The bus exited the kerbed bitumen and climbed a winding dirt track to reach an architectural icon.

Fort Nelson House is a rounded, glass eyrie that describes its owner and designer Esmond Dorney as craving both openness and seclusion.  The dwelling, which evolved over several iterations between 1966 and 1978, is surrounded by 78 acres of native bush overlooking the Tasman Peninsula, Bruny Island and the Meehan Range. The house and property, now owned and managed by the Hobart City Council, is rarely open to the public.

Yet, for a few weeks in November, Fort Nelson House became the venue for the 1960s classic drama Who’s Afraid of Virginia Woolf?, staged by the Tasmanian Theatre Co.The effect of entering the home was not just that of arriving at a venue, with all the marvelous pre-show anticipation that live theatre invokes. It gave the feeling of being locked into the dramatic space… and like hiding behind the curtains at a surprise party before the subject arrives. As two more busloads of patrons were delivered, the atmosphere built into a palpable air of apprehension. 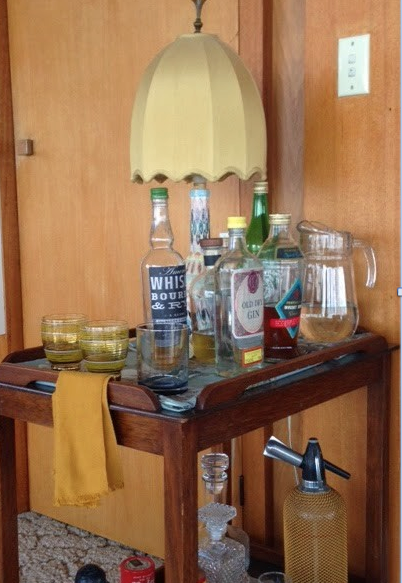 Who’s afraid of Virginia Woolf? by Edward Albee concerns two couples at distinctly different stages in life. George and Martha have traveled quite some way down the road of disappointment, their relationship curdled and neither partner’s career or family dreams realised. Nick and Honey are young and ambitious, beholden to the prescription for success in a small-town college. The drama is set very late at night in a booze-sodden living room.


I studied the play in high school and Albee’s skilled manipulation of language and tension was clear even to this 17-year-old, inducing the same feeling of dread prompted by the cheesy horror films that were preferred viewing at the time. The opportunity to watch the play as an adult, for whom the concept of relationships and unrealised expectation now has more resonance, was a rare treat.

Fort Nelson House has been unoccupied for several years, offering a blank canvas for designer Paul Rubie and stage manager Max Ford. House and stage blended seamlessly, and we in the small audience became voyeurs peering into an acutely uncomfortable domestic scene. The attention to detail invoked the era impeccably, without crowding out essential elements, such as the all-important drinks trolley. Martha’s grand entrance was made even more formidable by her fabulous satin, burnt orange dress. The hair complemented the costuming beautifully. Martha and Honey’s stylish coifs declined to ragged mops throughout the course of the play.

This well-set scene placed even more expectation on the performers to live up to the venue and staging, and each actor rose to that challenge magnificently. Jane Longhurst as Martha was so glamorous and outrageously awful, it was hard not to cover the eyes. The bullying seductiveness of Martha was powerfully met by Jeff Michel’s sneakily vicious portrayal of George. This was critical to the success of the play, if we were to be at all convinced by the credibility of their brutal partnership.

Honey and Nick’s submissiveness were reminiscent of small prey being hypnotised by a snake. Most of the adult nuances sailed over my head as a teenage reader, but one thing that I did remember grasping was how the younger, impressionable couple could not extract themselves from the manipulation of the older, more experienced pair. Karissa Lane’s portrayal of Honey was comic and original, providing desperately needed light relief. Rowan Harris conjured the barely-disguised vanity and ambition behind Nick’s seemingly ‘regular guy’ guise. All four performers arrived at the finish line of the grueling emotional marathon looking cool and solid.

So effective was the performance that taking the bus back down the hill to reality was a bit like gratefully catching a ride out of a bad party.  The play is not to everyone’s taste, described by one fellow patron as ‘a bit overwrought’. Yet for me, that performance of that play in that place left me feeling like I had just seen something really very special.
Posted by Kylie Eastley at 1:05 PM