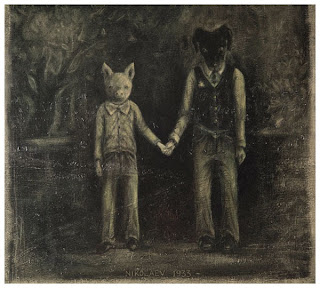 Being an atheist I am not moved by spirituality, indeed I am mistrustful of words such as god or the soul. Art then, in it's manifold forms, is what passes as prayer for me. Feeling this way about art, it follows, that there few experiences better than coming across an artist whom you know nothing about, but whose work immediately knocks you out.

Seeing -- quite by accident -- the exhibition, Ausländer, by Nina Keri, was one such experience. Ausländer is a German word meaning foreigner or alien. This word is often used as a pejorative. Keeping this in mind, one is struck by the power of the paintings.

Simple designs painted on mostly found bits of board, plexiglass, or whatever was handy and appropriate. With these simple designs, found surfaces, and her restricted palette Nina was able to impart a great, dark, the-world-is-closing-in sort of emotional experience.

All sorts of images assailed me, and sent my thoughts chasing off in varied directions. Seeking a grounding for these works I recalled half forgotten romanticised images of Old World fairy tales; the running about oak and pine coverts of my difficult boyhood. Or my later disillusioned young adult years of mindless work crowding images of Werther and of Woyzeck and always the strong scent memories of my Polish grandmother's potato and cabbage cooking.

When viewing a, for me, new artist, I want to see the work itself. In this case I knew nothing of Nina Keri and could only look at the work through my own personal prism. There are many times where I learn more about an artist or an art work, and then like it less. It was only later after I had left the gallery that a friend told me that the work was based on the experiences of the grandmother of the artist during World War Two. A Ukrainian living under German rule. This knowledge and context only deepened my appreciation of the work.

Being as poor as I am irreligious it is not often that I see an exhibit where I say, “I wish I could have bought one of the works.” Ausländer is one of the few. In all a powerful body of work from an artist I had no knowledge of, but an artist I am keen to watch and learn from and about. This is one of those rare must see exhibits, and I recommend everyone goes to see it.