Stompin
By Lucy Wilson Magnus
There are a gazillion hours of YouTube. Too many for anyone to see if they devoted their life to it. Yet, Stompin’s WeTubeLIVE had me walking into a vast fantasy of live solo clips, where I felt so immersed and saturated, I had the impression I’d walked into the brain of YouTube and taken a dozen slippery slides down its pulsing cells.

This hour-plus walk around, look, listen, touch, smell and do as you please performance show-cased the individual YouTube desires of 45 teenagers, into a WeTube collective of humanity exposing humanity watching humanity recording humanity. It was a blast.
The audience was as much of the performance as the carefully nurtured Tube creations, each neatly packaged into white uniform squares laid out on the old flamboyant carpet of the Albert Hall. It was hilarious to watch the teenagers of the audience dancing and mouthing the words alongside the performances in the squares. It was almost an impulsive cliché to see how many audients took photos and videos with their iPhones, possibly already uploaded onto YouTube itself.
And then it stopped. Silence. A creeky floorboard spoke a nothing. And the stillness sustained. And finally broke, returning to the noise, to the layered sound bites, DJ decks, screams and air slowly released from a balloon. Somehow the room relaxed with the return to sound. That was cool. Yes it was all very cool. In concept, content, form and frame.
Well done Stompin. You nailed it. And the best bit is the experience you open up for Launceston’s young dancing people.
I went with my one year old. She hijacked my pen and note book and crawled around, watching and scribbling and listening and doodling. And this is what she scrawled… 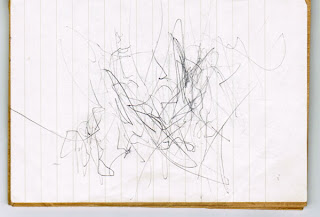